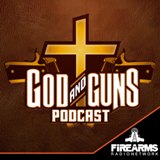 Intro: Welcome back to Episode 336 of the God and Guns Podcast . I’m your host, Troy. (Doug) And I’m your other host Doug. (Troy) We use this podcast to talk about  God, guns, and the responsible Christian gun owners’ interests. On this week’s show we will be talking about governments usual crisis response trick.

Guns: EDC.Picked up my new pocket gun. Sig P365 . Been carrying it as a backup gun but haven’t had a chance to shoot it yet. Went and saw Top Gun Maverick last night. It was good. Troy and Gunnar was able to pay a visit the other night, and got to hang out for a bit. My buddy Rick came down last weekend and we tried to kill a hog but they didn’t show up. My daughter Taylor got to fly on a B17 last weekend. It was the Texas Raiders. She had a blast.

God: Daily Bible Reading, Attended Resurrection Day at South Fork Sunday and saw lots of familiar faces, it was strange to feel like a visitor.

Just wanted to drop a review for you guys. I’ve been listening to your show for several years now and love it. You guys are a great pair hosting the show. Love the scripture, reviews, and chats. Keep up the good work and look forward to listening for years to come.

Main Topic
Freedom Does by Crisis

Armed Citizen
A homeowner in Houston, Texas, defended himself when an intruder allegedly broke into his residence on March 3, 2022.

He was asleep on the second floor of the home that early Thursday morning, when the sound of glass breaking at 1 a.m. awoke him. An intruder made his way inside the home, and eventually came to the stair to the second floor. When the intruder began to make his way up the stairs, he was confronted by the homeowner, who had armed himself. Upon encountering the intruder in the stairway, the homeowner fired a single shot.

The round struck the intruder in the neck and spurred him to flee the residence. The wounded would-be burglar then went to neighboring homes, knocking on doors to let the residents know he was shot. When authorities arrived a short time later, the intruder was discovered a few houses away, deceased. Other neighbors claimed that they witnessed the intruder scoping out other homes before the incident, and the homeowner did not face charges for his use of a firearm in self-defense. (khou.com, Houston, Texas, 03/04/2022)